President Xi Jinping on Friday met with former U.S. Secretary of State Henry Kissinger, expressing hope that the veteran diplomat will enjoy many more healthy years ahead and continue to be a promoter of and contributor to Sino-U.S. relations.

Xi appreciated the sincere feelings and positive efforts Kissinger devoted to promoting the development of Sino-U.S. relations over the decades, saying that Kissinger will be remembered for his important contributions in history. 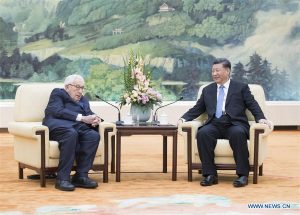 Decades ago, Kissinger, with profound historical insights and a deep understanding of traditional Chinese culture, worked together with the then-leaders of the two countries to advance the normalization of Sino-U.S. relations despite the two countries’ different national conditions. To this day, this pioneering move continues to exert great influence on the two countries and indeed the world, Xi noted. […]

Kissinger said he had visited China for nearly 100 times in the past 50 years and had witnessed the huge changes that have taken place in the country. Over the past 50 years, the bilateral relations had experienced fluctuations, but the general direction has always headed forward, Kissinger said. Läs artikel

The Mini-Committee of the expanded body of the Committee of Discussing the Constitution on Monday will start its second round at the UN Headquarters in Geneva with the participation of the Syrian Government-backed delegation and other delegations.

A statement issued by the office of the UN Special Envoy for Syria Geir Pedersen, of which SANA’s delegate to Geneva obtained a copy, said that the meetings of the committee will be behind closed doors like the previous round.

The Mini-Committee held its first round between Nov. 4-8 as it adopted an agenda proposed by the Syrian Government-backed delegation which also presented a proposal that mainly includes combating terrorism and drying up its resources, in addition to condemning the countries which support it, but the group of the Turkish regime rejected it. Läs artikel

Geir O. Pedersen, Special Envoy of the Secretary-General for Syria, said that on 30 October, 150 men and women gathered in Geneva to launch a Syrian-led, Syrian-owned, credible, balanced and inclusive Constitutional Committee facilitated by the United Nations.  There were 50 members nominated by each of three sectors:  the Syrian Government, the opposition Syrian Negotiations Commission and the so-called “middle third” made up of society activists and experts and other independents from inside and outside Syria. […]

Jeffrey (United States) said the ongoing negotiations in Geneva can lead the way to a resolution of the conflict in Syria, if supported by the Council.  “Just think of what we have seen since this Council last met to talk about Syria,” he said, citing a major new Turkish combat operation in the north-east and fresh airstrikes in the north-west, where several State military forces are present.  “Blame needs to be placed on the Iranian Government” for moving long-range missiles into Syria and continuing ground strikes through its proxies, he said.  Expressing support for Israel’s right to self-defence, he went on to call for a nationwide ceasefire in Syria and for unrelenting pressure from the international community.  In addition, there can be no reconstruction assistance to areas controlled by Damascus until a credible political process is underway, in line with resolution 2254 (2015), he said, noting that such reconstruction assistance would be premature at this time. […]

Dmitry A. Polyanskiy(Russian Federation), expressing hope that the Constitutional Committee will proceed successfully in its work, said:  “This is just the start of a long and difficult process.”  However, it is unacceptable for outside players to interfere in the Committee’s work or impose artificial deadlines.  The Astana guarantors — Iran, Turkey and the Russian Federation — stand ready to provide continued support to the parties based on the principle of unswerving respect for Syria’s sovereignty, independence and territorial integrity. […]

Bashar Jaáfari (Syria) “This dialogue is, first and foremost, one between Syrians,” he stressed, noting that the external interference is the greatest threat being faced by members of the Committee.  Recalling that Turkey invaded Syria and occupied its territory, he said some parties have expressed their support for the Constitutional Committee in a “very strange way”.  In other examples, the United States grabbed the country’s oil resources and installed forces on Syrian land, while Israel grabbed the occupied Syrian Golan in violation of the 1973 Agreement on Disengagement of Forces between Israel and Syria.  The Syrian people categorically refuse occupation by any terrorist groups, he said, rejecting all unilateral coercive measures and other forms of economic terrorism. Läs referatet